“Over a wide field of our economy it is still the better course to rely on the nineteenth century’s ‘hidden hand’ than to thrust clumsy bureaucratic fingers into its sensitive mechanism. In particular, we cannot afford to damage its mainspring, freedom of competitive enterprise.”

“in the long run, the aggregate of decisions of individual businessmen, exercising individual judgement, in a free economy, even if often mistaken, is less likely to do harm than the centralized decisions of a government; and certainly is likely to be counteracted faster.”

“I am afraid that I do not believe that any body of men can have enough knowledge of the past, the present and the future to establish ‘development priorities’ – which pre­sumably means procuring some developments as being good and prohibiting others as being bad.”

“What mystifies me is how he or any one else can determine what is a desirable type of industry such as should qualify for special assistance of this kind. In my own simple way I should have thought that a desirable industry was, almost by definition, one which could establish itself and thrive without special assistance in ordinary market conditions. Anything else suggests a degree of omniscience which I, at least, am not prepared to credit even the most expert with. I trust the commercial judgment only of those who are themselves taking the risks.”

“I am also, I must confess, a little sceptical of the theory that we have a right, if we could, to pass on our capital burden to future generations.”

“We suffer a great deal today from the bogus certainties and precisions of the pseudo-sciences which include all the social sciences including economics.”

“Official opposition to overall economic planning and planning controls has been characterized in a recent editorial as ‘Papa knows best’. But it is precisely because Papa does not know best that I believe that Government should not presume to tell any businessman or industrialist what he should or should not do, far less what he may or not do; and no matter how it may be dressed up that is what planning is.”

“I will not be proposing a course which has been under some public discussion recently – deficit financing. It is wholly inappropriate to our economic situation. In its least extreme form it is based on the theory that additional money generated by a Government deficit (and given currency, as necessary, by use of the printing press) will stimulate consumption and thereby production, in time to match the excess money with goods before real inflationary harm is done.”

“We enjoy a considerable net inflow of capital and I am sure that a condition of its coming, and staying, is that it is free to flow out again.”

“I find myself considered inhumane or unprogressive or sometimes merely odd, by some of my colleagues as well as members of the public, when I suggest that it is not axiomatic that a twenty-four hour supply in all circumstances must be our immediate aim. I cannot myself see any grounds for the belief that a twenty-four hour domestic water supply is an inalienable right of civilized man. It may be, if he can afford it and is prepared to pay the price.”

“I regard education as a good thing. But we must still ask what a good thing costs, how much of it we can afford and who is going to pay for it.”

“Perhaps I am over-conscious of the fact that every dollar Government takes from the taxpayer is a dollar he might otherwise have spent to meet a need or enjoy a pleasure or might have invested with profit. No-one who has proposed an increase in expenditure has felt under any obligation to propose a compensating increase in taxation.”

“I believe that [they] are innocently guilty of the twentieth century fallacy that technology can be applied to the conduct of human affairs. They cannot believe that anything can work efficiently unless it has been programmed by a computer and have lost faith in the forces of the market and the human actions and reactions that make it up.”

“I myself have no doubt in the past tended to appear to many to be more concerned with the creation of wealth than with its distribution. I must confess that there is a degree of truth in this, but to the extent that it is true, it has been because of my conviction that the rapid growth of the economy, and the pressure that comes with it on demand for labour, both produces a rapid and substantial redistribution of income directly of itself and also makes it possible to assist more generously those who are not, from misfortune temporary or permanent, sharing in the general advance. The history of our last fifteen years or so demonstrates this conclusively.” 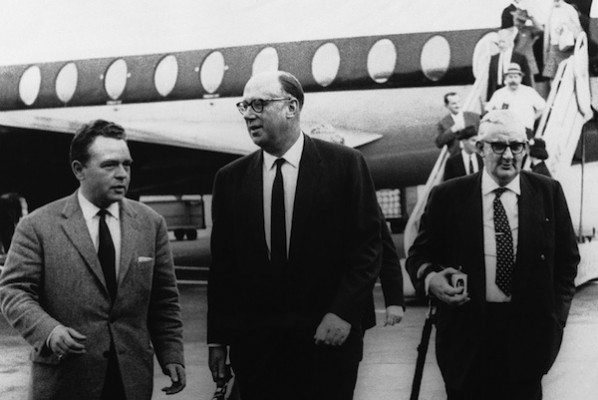 Quotes about Sir John Cowperthwaite and his philosophy

“Positive non-interventionism involves taking the view that it is normally futile and damaging to the growth rate of an economy, particularly an open economy, for the government to attempt to plan the allocation of resources available to the private sector and to frustrate the operation of market forces, no matter may be their short term consequences.” (Sir Philip Haddon-Cave)

“it was one of those glorious accidents that a man unversed in the 20thcentury fad for socialism could apply his 18th-century ideas in a territory unencumbered with democracy. Governors came and went, but Cowperthwaite kept balancing budgets, lowering taxes and keeping markets open, including the market in immigrants.” (Peter Clark, Sunday Times)

“From 1960 to 1996, per capita income in Hong Kong rose from about one-quarter of that in Britain to a third larger. It’s easy to state those figures. It is more difficult to realize their significance. Compare Britain, the source of the industrial revolution, the economic superpower in the nineteenth century, with Hong Kong, a spit of land, overpopulated, overcrowded, no resources except for a great harbour. Yet this spit of overcrowded land is able within four decades to provide its people with a level of income one-third higher than the income enjoyed by the residents of its mother country.” (Milton Friedman)

“Despite the urgings from the academics, the Government continued its policy of supervising economic progress without any overall plan. Left to the fortunes of opportunity and indiscipline, the economy prospered.” (South China Morning Post)