David Warsh considers John Cowperthwaite and Architect of Prosperity in his online column of Economic Principals.

He notes that Cowperthwaite’s economic policies are relevant today:

But Hong Kong is just an island, right?  No real country could succeed the way it had, could it? In fact the People’s Republic of China pursued a highly similar strategy as it entered global markets after 1978, encouraging foreign investment; entering light and medium industries first, rather than capital-intensive ones; turning agriculture back to its farmers; and, piling up enormous reserves as a precautionary measure.

He is concerned at how the United States may have lost its way in terms of economic policy. And he argues that Adam Smith is as relevant today as he was 250 years ago:

In fact, it hasn’t changed much since Adam Smith wrote an admirably terse prescription for it 250 years ago: “Little else is requisite to carry a state to the highest degree of opulence from the lowest barbarism but peace, easy taxes, and a tolerable administration of justice: all the rest being brought about by the natural course of things.”

Architect of Prosperity: Sir John Cowperthwaite and the Making of Hong Kong, by Neil Monnery (London Publishing Partnership) has won the Gold Medal for Biography at the Axiom Awards

Prof J. R. Shackleton of the University of Buckingham wrote a review of Architect of Prosperity in Economic Affairs (Vol 38.1)

The Royal Economic Society newsletter (Issue 180) carries an article by Neil Monnery describing how Sir John Cowperthwaite came to believe in markets through empirical observation. His experience seeing entrepreneurs at work in post-war Hong Kong mirrored how his hero, Adam Smith, learnt much from understanding how a pin factory worked.

“while the White Paper paints a rosy picture of a future in which Britain will aim to be “the most innovative country in the world,” there is the little matter of getting there.”

“I’m just reading Neil Monnery’s fascinating book on John Cowperthwaite’s role in promoting Hong Kong’s meteoric economic development—which involved little regulation and minimal government. It has been called “positive non-interventionism.” After ploughing through this White Paper, it seems a bit of Cowperthwaite’s scepticism is very much in order.”

In this week’s Spectator, Rory Sutherland, argues that we need an information act because too often data is mis-reported and misused. He notes:

The great Sir John Cowperthwaite, architect of Hong Kong’s prosperity and subject of a recent biography by Neil Monnery, banned the collection of macro-economic statistics on the grounds that their meaningless fluctuations would only encourage people to meddle. I propose something similar for Britain: we could call it the Freedom of Uninformation Act.

Caleb O. Brown and Neil Monnery discuss how did Hong Kong rise to prominence as a hub of global commerce and Architect of Prosperity: Sir John Cowperthwaite and the Making of Hong Kong.
https://www.cato.org/multimedia/cato-daily-podcast/architect-prosperity-sir-john-cowperthwaite-making-hong-kong

Marian L. Tupy, editor of www.humanprogress.org writes in www.reason.com about the link between economic growth and health and life expectancy. He draws on Architect of Prosperity, and the experience in Hong Kong, and that central Europe where he originated. Interesting analysis…

Press release by the Government of the Hong Kong Special Administrative Region containing the speech by the Financial Secretary, Mr Paul Chan, at the Cato Institute Book Launch event in Washington, DC, the United States (US), on October 13 (Washington, DC, time). 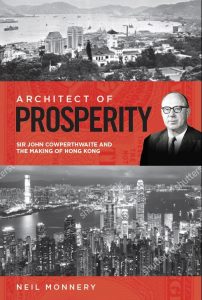